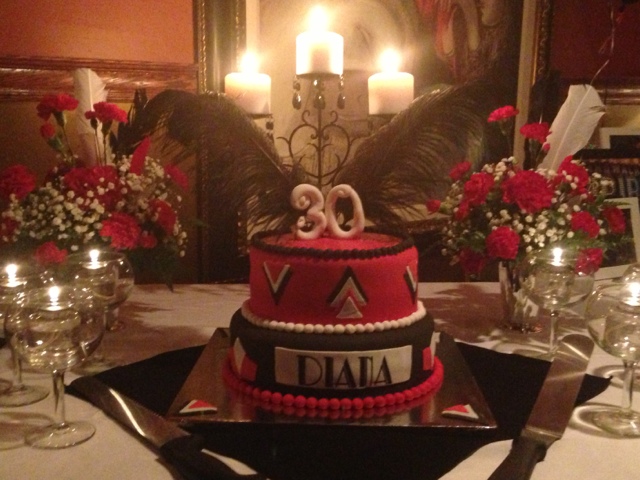 The day I have been waiting for is FINALLY here!!! After two years waiting for one of my favorite books of all time to come to life in a new movie version, THE GREAT GATSBY is in theaters! There’s something amazingly romantic and tragic about F.Scott Fitzgerald’s The Great Gatsby that stole my heart at a young age. Since I don’t want to spoil anything for those who haven’t read the book or seen the movie, I will stop myself from talking too much about the plot. 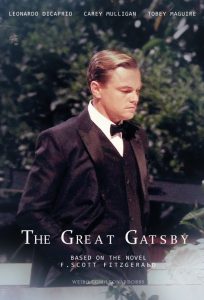 All I will say is that I could not think of a better person to play Jay Gatsby in this version than my favorite actor, Leonardo DiCaprio. (I think Carey Mulligan will be a great Daisy too!) 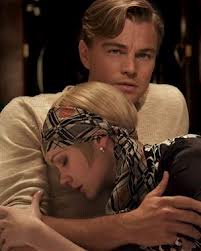 Jay Gatsby is notorious for his lavish parties in Long Island, NY. Basically, no one does a party like Jay Gatsby. So when I hit the big 3-0 last October and my family generously wanted to throw me a birthday party, I decided to have a 1920s themed party to “say goodbye to my roaring 20s.” Naturally, I had to incorporate aspects of the Great Gatsby era to coincide with the movie coming out.

My favorite television show, Boardwalk Empire, was also airing its third season on HBO at the time so I decided to incorporate elements from that show as well. For those who aren’t familiar with Boardwalk Empire or the Great Gatsby, both are set during Prohibition. I tried to take these elements and really create a special atmosphere for my birthday party. If you want to have any kind of 1920s party, please see my tips below for some easy and affordable ideas.

1.  CREATE THE PERFECT SPEAKEASY ATMOSPHERE. What better place to have a party than a bar with a speakeasy kinda feel? I chose Ash by El Humidor for my party because it is a cigar bar and the perfect setting for a 1920s style gangster/flapper party. (In Pennsylvania, unlike in NYC, you can serve food and alcohol in cigar bars.)  Ash is nestled underneath an Italian restaurant, Buca del Vino, and has that perfect old school, classic smoky and romantic feel. The staff at Ash was so kind and accommodating. We were floored by the absolutely brilliant and amazing job that Tom Sobieski did in decorating the place. When we talked in, we were beyond excited and really felt like we were in an ideal 1920s type atmosphere. THANK YOU TOM!!!! Which brings me to my second point …

2. ADD SOME FESTIVE DECORATIONS TO GO WITH THE THEME. We had a banner made and I ordered some decorations from Shindigz. I love flowers and really wanted to create and elegant feel, yet wanted something affordable for my centerpieces.  My cousin Susan, another Boardwalk Empire fan, suggested I go with red carnations since Nucky Thompson from Boardwalk Empire is famous for wearing them in his suit lapel. I also added some black and white flapper-like feathers to the vase. (Black, white and red were very popular colors.) Carmen’s in Exeter did a wonderful job! 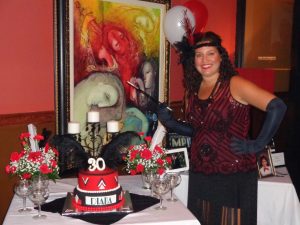 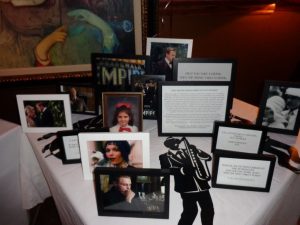 3. CREATE A NOSTALGIC MOOD WITH MUSIC. Jazz, ragtime and broadway musicals were popular in the1920s. This was an area of dance halls and the popular phonograph (the horn shaped record player!) Boardwalk Empire fans may remember when Lucy danced to her phonograph in Season 2.  Though we were over prepared with our own music for the party, Ash had a wonderful sound system with the perfect 1920s themed music. If you’re having a party and looking for a good 1920s soundtrack, try the 1920s Radio Network (it streams for free) to set your mood or create a 1920s playlist on Pandora.

3. PLAN THE PERFECT MENU. This is the best part. Chef Joe Ginthner Jr. from Ash/Buca del Vino took the time to sit with us and listen to my crazy ideas about how I really wanted to have food from the 1920s. Together, we created a menu to thrill all of my 1920s desires within a budget. After doing some research, I was thrilled to learn that Italian food was uber-popular in the 1920s. I printed out this tidbit of information and placed it in a frame close to the food. I’m not sure if anyone noticed it or read it, but the information was there for food historians like myself.

WHAT DID THE AVERAGE AMERICAN EAT IN THE 1920’s?

With the passing of the World War I, America settled down to begin an era of onrushing prosperity. Prohibition, with its tremendous impact on the eating habits of the country, had a great deal to do with the introduction of Italian food to the masses. The Italians opened up speakeasies by the thousand, with Mama doing the cooking and Papa making the wine in the basement. The food was not quite the same as the food the Italians had eaten in the Old Country because Sicilian cooking was traditionally based on austerity. By contrast, America was rich, and a protein rich country – allowing for more than just pasta. Italian immigrants were happy to add these symbols of wealth to their cooking. Meatballs, rich meat sauces, veal cutlets cooked with Parmesan or with lemon, clams stuffed with buttered herbed crumbs, shrimp with wine and garlic, and mozzarella in huge chunks to be eaten as appetizers were all foods of abundance, developed by Italian-Americans.
In addition to speakeasy dining, many people entertained elegantly at home, holding extravagant cocktail parties where they could enjoy their homemade wine and bootleg liquor.  They served savory snacks such as salted nuts, deviled eggs, passed canapés, shrimp or mushroom toasts, lobster and crabmeat, tea sandwiches, fancy salads, and chafing-dish recipes. The introduction of refrigerators (for those who could afford electricity) enabled longer storage of perishable foods, so fruits and vegetables also became widely popular. 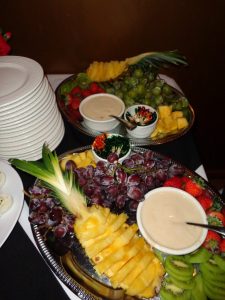 4. THE CAKE: It’s not a real party or birthday celebration without cake. I loved, loved, loved my cake!!! I obsessively pin cakes on Pinterest and knew I wanted something eye catching.  I pinned some ideas and designed my own cake with cake-queen Francesca Campisano Burke, who executed my ideas to perfection. My cake was not only beautiful, but delicious – even with the fondant that I insisted on having!  I had two different flavors – chocolate with chocolate mousse and vanilla with raspberry. I really loved this cake and will remember it for the rest of my life. 🙂 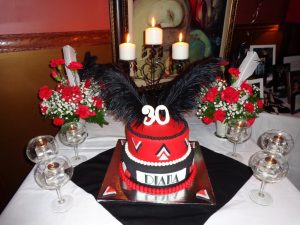 5. DRESS THE PART.Costume attire was optional and encouraged – so I instructed my guests to come as a flapper, gangster, big band player, silent movie character. Many of them did, even one of my spirited and wonderful BFFs who was pregnant at the time – and we had the BEST time!  I ordered my costume from Unique Vintage and was very happy with it, though there were others that I REALLY loved – but they were on back-order  (Order WAY ahead of time, especially now because these costumes are in demand!) 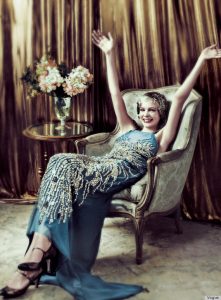 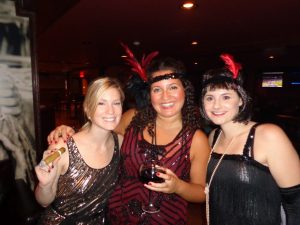 6. LASTLY, TREAT YOUR GUESTS TO A FAVOR.  I always like to give some kind of a token of the party away as a remembrance. For 1920s themed favors, I decided to make little candy bags. I put this little sign next to the candy bags to explain why they were getting candy bars. I packaged the bars in clear bags with a beautiful black and white ribbon I found at Michael’s.  I also had strings of party beads that looked like pearls to adorn my guests when they arrived at the party. I purchased these online at Shindigz.

1920’s candy BAR CRAZE
When Prohibition went into effect on January 16, 1920, it increased the production of soft drinks, put hundreds of restaurants and hotels out of business and spurred the growth of tea rooms and cafeterias. It also destroyed the last vestiges of fine dining in the United States.
Hotels tried to reclaim some of their lost wine and spirit profits by selling candy and soda pop. Thus, began the candy bar craze.
Reese’s Peanut Butter Cups (1922 ) • Twizzlers (1929) Mounds (1922)  Milk Duds (1926) • Milky Way (1923)
Heath Bar (1928) • Butterfinger (1923) • Babe Ruth (1923)
Enjoy!