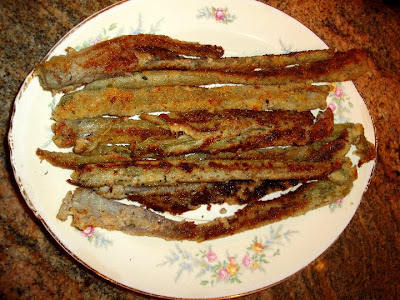 My grandfather recently came to me with a very special present wrapped in a brown paper bag. “I brought you some cardoons,” he said in a proud voice, knowing I’d been waiting for them all month. I didn’t ask where they came from, because I knew better. For some reason which I never fully understood, the locals (my family members included) that know about the savory salty deliciousness of cardoons are very secretive about cardoons and take great care not reveal the secret places that they grow. (Hint: the side of the road?)
Another reason why people in NEPA are so secretive about “cardoons” is because they’re NOT really cardoons. We just call them that.  It is almost impossible to find REAL cardoons in Northeastern Pennsylvania so technically we use Burdock (it’s a root vegetable interchangeable with cardoons). These “cardoons” can be found here in late spring to early summer.
Cardoons (pronounced “kahr-DOON”) look like celery stalks but are very salty and taste almost like an artichoke. Famed Italian Chef Mario Batali calls cardoons, or “cardoni” in Italian, one of his favorite vegetables and has included a cardoon recipe in “The Babbo Cookbook.”  He also has a few cardoon recipes on the FoodNetwork.com.  But cardoons aren’t just an Italian speciality – they are also popular in France and Spain.  Cardoons grow like giant bunches of celery and look almost like weeds but they do flower. See a photo of them on Wikipedia.com.  When picking cardoons, look for stalks that are firm and have a silver-greenish color. (See photo below.)  When I was a little girl, I was afraid to eat them.  But rest assured, they taste MUCH better than they look! 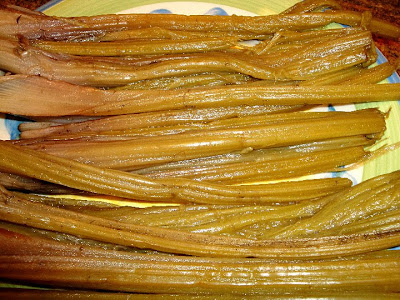 When cooking with cardoons, you use only the inner stalks of the plant.  The outer layer needs to be peeled and flowers removed. It is important to rinse them thoroughly before using. Many people soak cardoons in acidulated water to prevent them from browning. According to the Deluxe Food Lover’s Companion, acidulated water is water in which a small amount of vinegar, lemon or lime juice has been added to prevent discoloration of some fruits and vegetables that darken quickly when their cut surfaces are exposed to air.  If you ever wanted to keep your apples from browning before making an apple tart, etc., it is best to soak them in this water. You can prepare acidulated water by adding 1.5 tablespoons of vinegar OR 3 tablespoons of lemon juice OR 1/2 cup of white wine to a quart of water. Store in an airtight container for up to 2 weeks in the refrigerator. For more on preparing cardoons, see this video from Saveur magazine.

Cardoons can be cooking in many different ways.  They can be steamed, roasted, stewed, pan fryed, boiled.  They can be buttered and broiled, used in sauces or gratins. I have typically seen them pan fried or served in a quiche or a frittata. (They are really great with eggs!)  Below I have included an easy rustic recipe for pan frying these unique vegetables.  This dish would make a great appetizer and I highly recommend trying it! 🙂 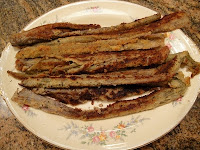 Be sure to clean your cardoons thoroughly and boil them in boiling water before using.

Directions:
In a small bowl, crack three eggs and lightly beat with a fork to mix. Season with a little bit of salt and pepper. In large separate pan or bowl, combine the breadcrumbs, parmesean cheese, and dried mint. Gently dip the cardoon stalk in the egg mixture.  Then repeat in with the breadcrumb mixture. 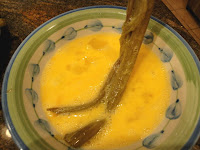 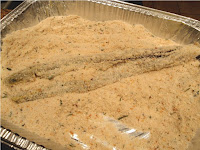 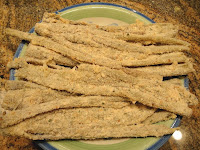 Heat olive oil in a nonstick skillet. Using tongs, gently place the breaded cardoon mixture into the frying pan. Brown on both sides. Cardoons should be somewhat crisp and crunchy. Remove to a paper towel lined pan or dish. Season with salt. Serve immediately. 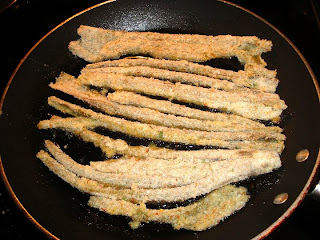 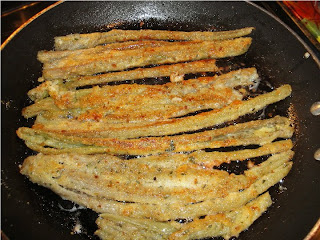 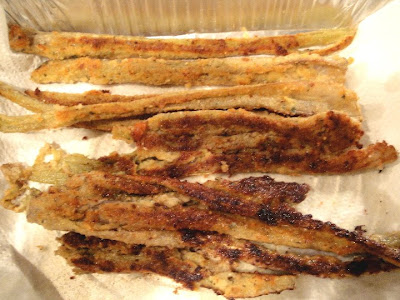