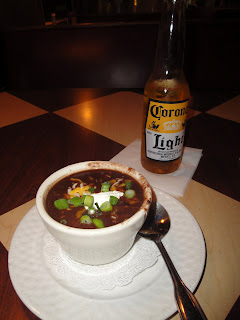 I’ve always been a big fan of Black Bean Soup. It was one of my favorite dishes when I worked at Union Square Cafe. I also love the one they make at Canteen 900 in Kingston. I recently had an amazing bowl of spicy black bean soup at the Sun Dog in Neptune Beach, Florida. (Guy Fieri filmed there!)


When I want to make a nice bowl of hot and spicy black bean soup myself, I have a go-to recipe that I got from the Sonoma Diet Daily email. I had to post this because I make it all the time and I just love it! It’s also very low in fat and calories. I usually don’t add the sherry vinegar. I top with a dollop of reduced fat sour cream mixed with a drizzle of lime juice to make it more creamy. 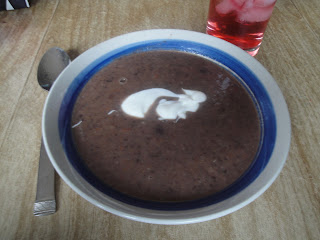 
2. Discard lemon slices. Remove 3 cups of the soup mixture to a large heatproof bowl. Use an immersion blender or potato masher to coarsely puree or mash the mixture in the bowl. Return to Dutch oven and bring to a boil; reduce heat. Cook, uncovered, for 10 minutes more, stirring occasionally.


3. Stir in vinegar and fresh oregano (if using).

*Note: Because hot chile peppers contain oils that can burn your skin and eyes, wear rubber or plastic gloves when working with them. If your bare hands do touch the chile peppers, wash your hands well with soap and water.
To freeze soup: Divide soup among freezer containers with covers; seal, label, and freeze for up to 3 months. Thaw in the refrigerator before heating through.
Nutrition Facts per serving: 223 cal., 5 g total fat (1 g sat. fat), 0 mg chol., 1,381 mg sodium, 37 g carbo., 12 g fiber, 17 g pro.

There’s something positively lovely and delicate about a quiche, a versatile egg dish that can be served for lunch or dinner. I love a nice fluffy, savory piece of quiche anytime of the year – but one piece of quiche could easily wreak havoc on any healthy diet. Here are two versions of easy quiches. The first super-healthy version is an adaptation of a recipe from my favorite former real housewife from NY, Bethenny Frankel. (I love Bethenny and strongly recommend all of her books!)

The second recipe is a basic recipe but is great for entertaining or days when you really want to indulge! Feel free to change these recipes and add or omit different vegetables and types of cheeses. I’ve also posted a recipe for an asparagus, ham and Gruyere quiche. See my other examples below. 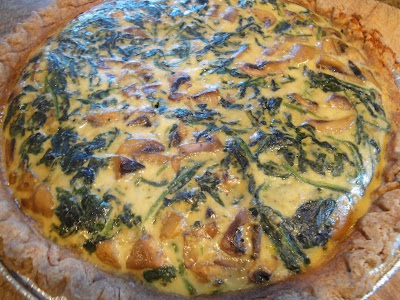 Fairytale Spinach and Mushroom Quiche
Serves 6
Ingredients:
1 frozen whole grain 9 inch pastry shell (Like Wholly Wholesome at Wegmans)
2 cups of fresh spinach, washed and chopped
2 teaspoons of olive oil
1/2 teaspoon of salt
1/4 teaspoon black pepper
1 cup of sliced mushrooms
2/3 cup of grated Parmesan cheese
1 cup of soy or almond milk
1 egg
3 egg whites
Directions:
Preheat the oven to 375 degrees. Bake the pastry shell for 12 minutes or until browned. (It will be difficult to see if it is brown since it’s a multigrain crust.)
Add a tablespoon of the oil to the skillet over medium high heat. Saute the spinach until its wilted down, about three minutes. Add the remaining tablespoon of oil and saute the mushrooms until they’re browned.
Sprinkle 1/3 cup of the Parmesan cheese on the bottom of the crust. Top with the spinach and mushrooms.
In a separate bowl, mix the almond milk, egg and egg whites. Pour over the spinach and mushroom mixture and sprinkle with the remaining Parmesan. Bake for 45 minutes until it puffs up and the top is firm and golden brown. Serve warm or cold. 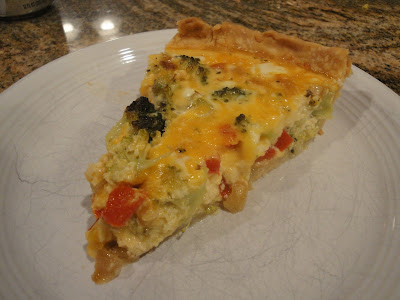 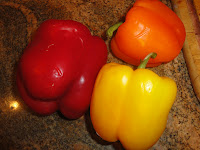 Preheat the oven to 375 degrees.  Heat olive oil in a large skillet over medium-low heat. Add the onions and saute for 3 minutes. Add the peppers to the onions and saute for a few minutes until soft. Meanwhile, steam the broccoli in the microwave by placing it in a microwave safe bowl with 1/2 inch of water on the bottom. Cover with a microwave safe plate on top. Microwave about a minute, or until the broccoli is soft. Drain the remaining water from the bowl. Add the broccoli to the pan and saute until it has some color to it, about 2 minutes. 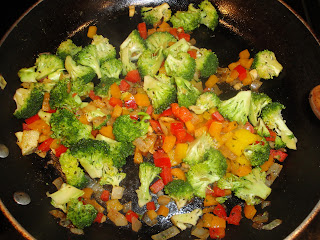 In a separate bowl, combine the eggs, half and half and cream. Beat lightly or blend with a fork.
Place the Pillsbury Pie Crust into a 9 or 10 inch pie baking dish. Arrange onions, peppers and broccoli in the crust. Top with the sprinkled cheese. Pour the egg mixture of the ingredients. 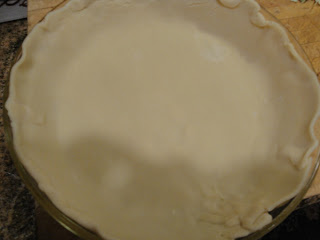 Bake in oven for approximately 1 hour, or until quiche is cooked through. If the top starts to brown, cover with a piece of tin foil so it doesn’t burn. Serve warm or cold.

Here are some other variations I have tried. Quiche is easy so don’t be afraid to get in there and mix up your ingredients and try different combinations! 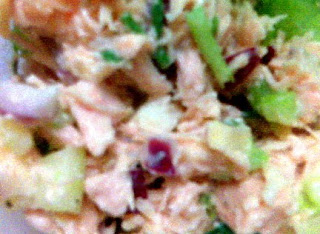 I was a young and impressionable 18 year old when I first arrived in New York City. I didn’t know a lot about city life but I quickly learned that Manhattan cuisine was unlike anything I’ve ever tasted in my homeland of Northeastern Pennsylvania.  (Don’t get me wrong – NEPA has some amazing foods that cannot easily be replicated in NYC or anywhere else. AKA: square pizza, pierogies, cheesesteaks, Pennsylvania Dutch influenced menu items, WINGS and other items too numerous to mention.)  But in New York City, fresh of the Martz Bus, I felt like a girl who had just won the golden ticket.

From the corner deli to the Zagat rated restaurant, everywhere I went in New York City there was something new for me to taste. Authentic Mexican, Italian, French, Asian, Moroccan, Indian, Thai, Creole, Soul Food, Southern Barbecue were all easily within my reach.  Some were available via biker delivery, 24 hours a day.  Even ordinary items like pizza and bagels were available in so many variations and packed full of so many new flavors, I felt overwhelmed at times.  All of my life, I had loved food but never realized how much until I arrived in the city.    Every time I stepped foot outside of my apartment, I became a kid in a candy shop.  In many ways, when I visit the city, I still am.On one occasion during my first Spring season in New York City, I had one of the most incredible, flavorful chicken salad sandwiches while enjoying a sunny picnic lunch in Central Park. I had ordered lunch to-go from a little deli on the Upper West side. While I don’t remember the name of the deli, I do remember the chicken salad sandwich – in fact, my mouth still waters when I think about it.  Unlike any chicken salad I have ever had before, this chicken salad was composed of jumbo lumps of roasted white chicken breast that undoubtedly did NOT come from a can.  Scooped between two pieces of thick, crusty rustic rye bread, this chicken salad had a unique crunch that was intensified by slivered roasted almonds.  It was as goey as it was crunchy, mixed with just the right amount of creamy mayonnaise that dripped into the wax paper it was wrapped in as a I took each bite.  Most surprising to me were the chopped New York red delicious apples hidden in the chicken salad mix which took this chicken salad to an entirely new level of deliciousness for a sandwhich.

Now, years later, I still crave this sandwich so I’ve come up with my own quick and light version.  I switched full fat mayo for a lighter version and I cut down on the amount to save some calories.  To save time, I used canned chicken breast, but it is admittedly more flavorful if you roast your own chicken breasts. (Season with olive oil, salt and pepper. Bake for 35-40 min at 350 degrees. Shred or chop.) But who really has time for that? 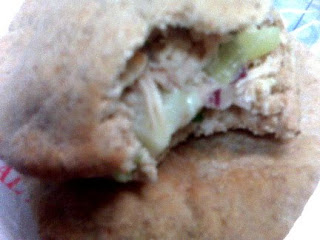 If you need a little bit more comfort and buttery goodness, try this salad on buttered and grilled Texas toast. Beware this will increase calories/fat but sometimes, its all worth it! 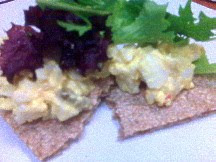 I am always looking for simple lunch recipes that are convenient to brown bag so I can take them to work. This is no easy task as the flavors, consistencies and textures of certain brown bag lunches can easily lose their magic if you make them the night before and then transport them during your morning commute.

This simple egg salad recipe manages to retain its flavorful kick and will give you something to look forward to during your lunch. And it’s light on the calories, just in time for the new you in the new year! 🙂 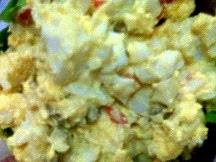 
Gently chop the hardboiled eggs and mix in olives, onions, and mayo. Add the Frank’s hot sauce to taste (I use at least 1 teaspoon but I am certain hot sauce lovers will want more.)  Pile desired amount onto light Wasa crackers. Top with mixed field greens as a garnish. Enjoy!