In the United States, November 11th is Veteran’s Day, an annual holiday commemorating Veterans for their honorable service, bravery, and sacrifices they have made in serving to protect our country.  In my family, not only do we celebrate Veteran’s Day, but we also celebrate the Catholic holiday of St. Martin’s Day.  It is also the feast day of my late paternal grandfather, Martin Collins. I wait for this holiday all year because when my maternal grandfather bakes his infamous Muffaletta bread to mark the occasion.  Here is how this tradition came about: 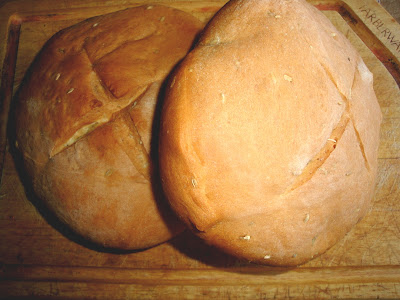 St. Martin, a Roman soldier and monk who was baptized as an adult, was the bishop of Tours in 397 A.D. He is commonly depicted riding on a horse and is best known for allegedly giving a beggar half of his cloak during a snowstorm.  St. Martin of Tours is commemorated on November 11, the day which he was buried.

St. Martin’s day traditionally marks the end of the fall farvest and the beginning of winter, a time when newly produced wine is ready for drinking. Around the world since late 4th century, this is also a period before the season of Advent starts when people would begin a 40 day fast. This period was called “Quadragesima Sancti Martini,” which is Latin for the “forty days of St. Martin.”  On St. Martin’s Eve, people traditionally ate and drank as much as possible before starting their fast. Thus, St. Martin is the patron saint of horses, mounted soldiers, tailors, wine cask makers, and even, well, “drunks.”

In Italy, many Sicilians celebrated St. Martin’s day by dipping hard biscuits containing anise seeds into Moscato wine. These biscuits are small flat loaves of bread known as Muffaletta. Many Americans associate Muffaletta with the famous New Orleans hero-style sandwich that originated in 1906.  This New Orleans style Muffaletta is filled with layers of provolone cheese, Genoa salami, ham and a chopped mixed olive salad served on “Italian bread.”  However, the Muffaletta bread that is used to make this traditional sandwich comes from this Sicilian St. Martin’s day tradition. Today, there is still a Muffaletta festival celebrated in Reizi and the Province of Caltinessetta in central Sicily. 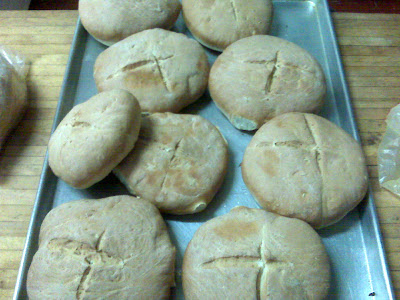 My grandfather has been making Muffaletta bread to celebrate St. Martin’s Day since I was a little girl. (And every year he ends up making more and more to try and keep up with the demand!) We serve it toasted, with a dab of ricotta cheese and drizzled honey on top. I love this bread so much that I usually freeze a loaf and enjoy it with the ricotta and honey for a special breakfast on Christmas morning. It’s savory and sweet and the perfect fairytale!  If you are craving a taste of this tradition, try buying a loaf of Fennel or anise bread at your local bakery. Spread some part-skim ricotta cheese on the bread. Toast in the oven until it is warmed through and drizzle it with some honey immediately upon removing from toaster oven. 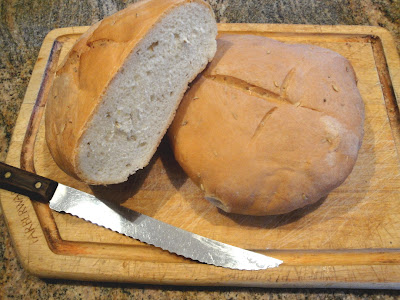 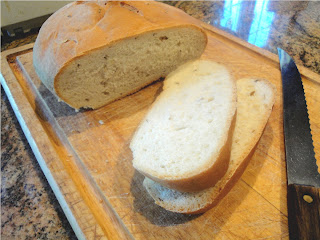 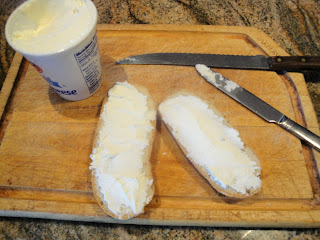 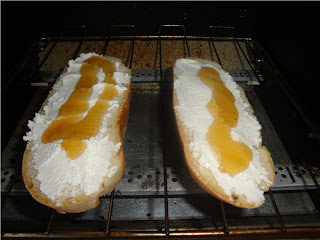 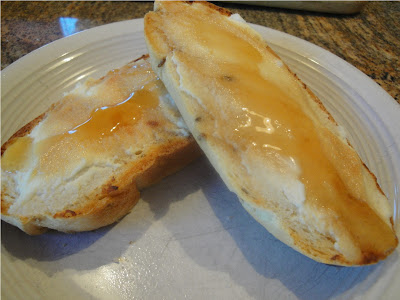 As an alternative, instead of serving this bread by the individual slice as shown above, you can also bake each half in the oven with the ricotta spread on top. Then drizzle with honey and put together as a sandwich and serve as shown below.  This is how Muffaletta is traditionally cut and served in New Orleans. Here we kept the traditionally Sicilian tradition and used ricotta and honey.
Enjoy!