And finally, I have saved my favorite dining experience in Nashville for last. Merchants is by far my favorite restaurant in downtown Nashville.  While it has it’s glitches, each time I have dined there it has been a pleasant experience with the food far exceeding my expectations. And if true love means seeing an imperfect restaurant perfectly, then I love it there. 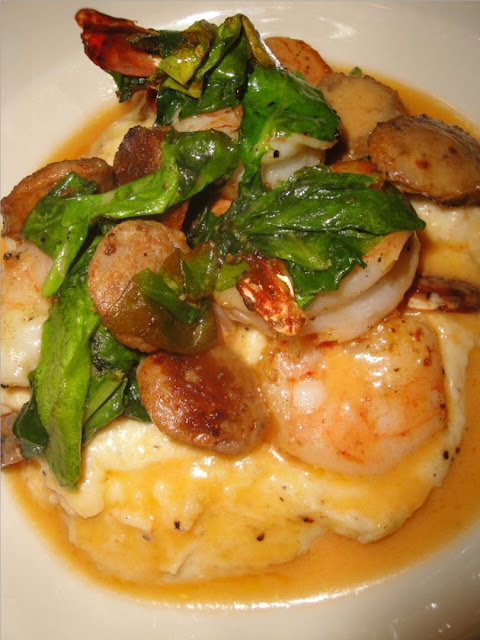 Merchants was established in 1892. We learned during our first visit to Merchants years ago that it was a former hotel, drug store and ice cream parlor. (And apparently the drug store/ice cream parlor interlapped, as our waiter told us colorful stories about elderly women sprinkling their medications on their ice cream at the marble bar, which is still there today.) Our waiter told us ghost stories about the building and even led us on a tour throughout the upper floors of the restaurant.  Maybe it was the dinner cocktails, but we all undeniably felt a strange energy on one of the top floors and even a gust of cold air. If I was a ghost, I wouldn’t mind being confined to haunting Merchants as long as I had my taste buds still in tact. 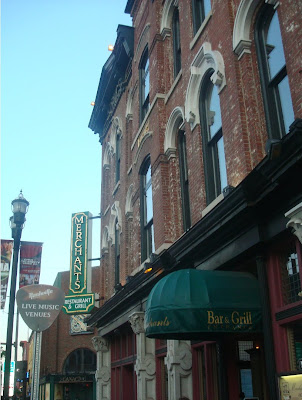 This year it was especially packed due to the CMA Fest crowd. We didn’t have a reservation but we were still promptly seated on the second floor of the restaurant.  The first floor is a bit more casual and includes a bar. On the second floor you will find white linen table cloths and napkins with real silverwear ornamenting the tables, a nice and drastic change to the barstools and paper napkins and utensils we’ve been putting to use all week. Our waiter looked exhausted (rightfully so after the dinner rush before the concert) but he still managed to smile and was very polite and helpful. He was such a nice person and really patient with us. I was a little bit disappointed that Merchants was featuring a limited menu because of the CMA fest but I understood the reasoning behind it.

We ordered two appetizers: the fried pickles and fried green tomatoes. The fried green tomatoes at Merchants were, hands down, the best I have ever had in my life. The huge tomatoes were breaded and fried, and not too tough or mushy. They were covered with a black bean, corn, red onion salsa and smothered in a grainy dijon mustard sauce. 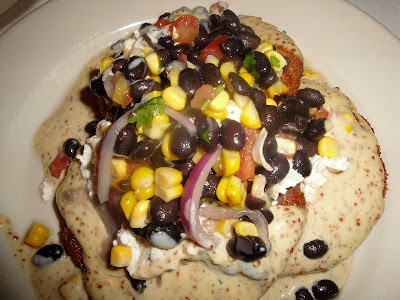 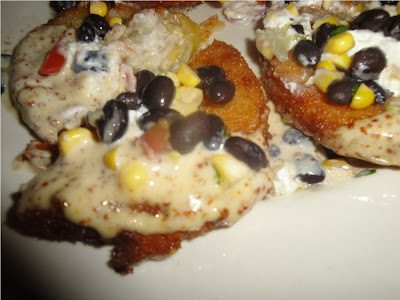 The butter pickles were battered and fried and served with a red pepper aioli dipping sauce. These were enjoyable as well, but I have a hunch that if some fresh herbs (dill perhaps) were used in the batter, it would have kicked them up a bit. 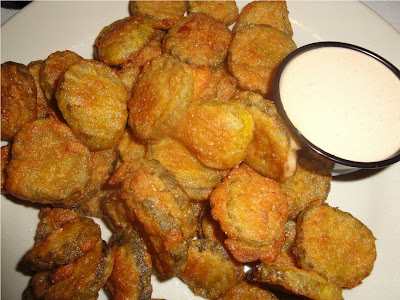 The house salad was standard but solid and excellent. Mixed greens, cherry tomatoes, homemade croutons, parmesean cheese and your choice of dressing. 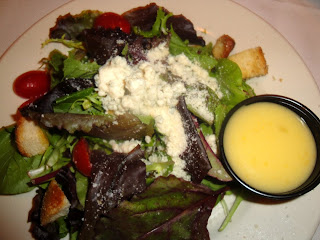 For dinner, I ordered a real southern staple, something extremely difficult if not impossible to find on the menu of a restaurant in the northeast region: Shrimp and Grits.  This flavors of this dish were phenomenal and if I could have, I would have ordered another one, boxed it up and flown it home first class.  Jumbo pieces of juicy grilled shrimp, smoky andoiulle sausage with sauteed spinach over a mound of cheesy grits and lathered with a light tomato broth, this dish was pure southern perfection.  With each bite, I thought to myself how grateful I was to be alive and feasting on this succulent dish.  I am determined to recreate this in my own home but I am certain it will take a few attempts before I can master the cheesy grits. 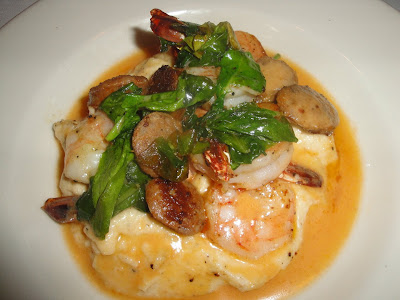 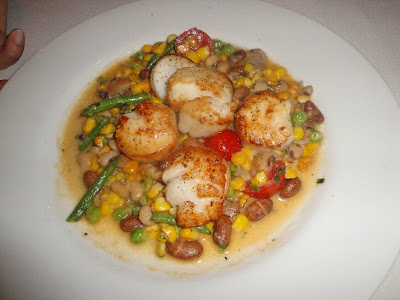 The blue corn tacos were pretty as plated, but a little bland. The blue corn tortilla shells were soft and seemed to be homemade but something additional was needed to kick this dish up a notch. It could have been improved upon, but I’d still order them if I were in the mood for tacos.  Spicy beans were served on the side but cheesy grits were available as well. 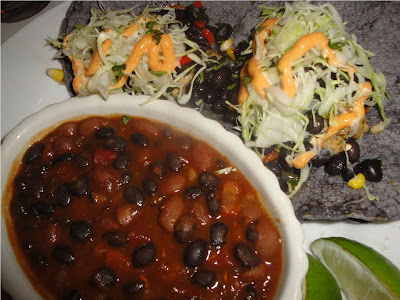 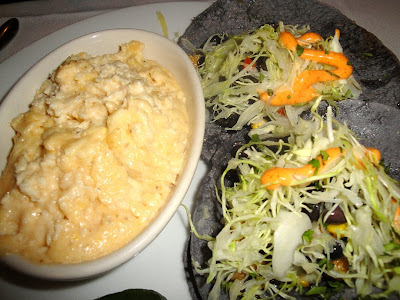 Merchants also offers an array of creative desserts, like the key lime pie martini below. (Had this during a previous trip to Nashville.) 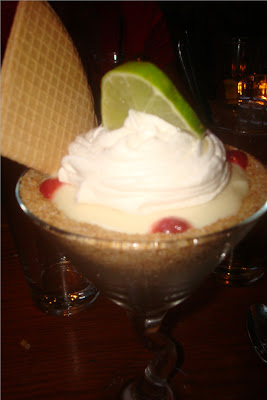 I will absolutely return to Merchant’s again. The next time I am in Nashville, I will call ahead to make sure that they are featuring the full menu so we can order it up and sample a wider variety of southern specialties! See you next year Merchants!