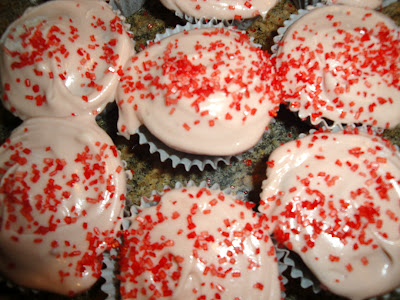 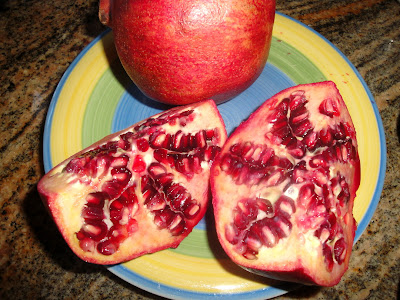 “Let us go early to the vineyards to see… if the pomegranates are in bloom – there I will give you my love.” Song of Solomon 7:12
‘Tis the season for one of the world’s oldest and mythical fruits, the pomegranate.  Dubbed “nature’s most labor intensive fruit” by Barron’s Food Lover’s Dictionary, pomegranates are the perfect seasonal fruit to zest up your holiday dishes. Pomegranates are large, heavy fruits with a thin, leathery skin.  The tiny red seeds that grown within a white membrane are edible.  These seeds, called arils, are en-coated in a red juicy pulp and are rich in potassium and vitamin C.  You can sometimes buy these arils separately, as prying them from the skin of the pomegranate can prove to be a messy and dangerous task.  Pomegranate juice stains easily, so beware!  Why go through the trouble of cutting and seeding these beautiful fruits?  Asides from the juicy flavor and delicious taste, pomegranates allegedly have more antioxidant power than other beverages, including red wine, blueberry juice, green tea and cranberry juice.
The pomegranate is rich in history and is believed to be one of the world’s first cultivated fruits.  It has been a symbol of good health for centuries all over the globe, and because of this, pomegranates were often depicted in artwork and used as decorations.  The fruit originated in the Middle East over 4,000 years ago. Pomegranates were found in Iran and the Himalayas in Northern India, and then culitvated throughout the Europe, Asia, Africa and China.  In 957 B.C., the pomegranate decorated King Solomon’s temple and the robes of  the Torah. The pomegranate also adorned Jewish coins, jewelry and furniture. 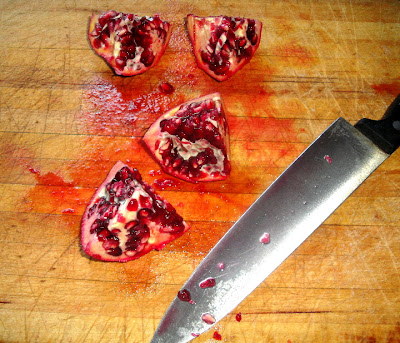 In 1600 B.C., the pomegranate was abundant in Egyptian culture.  The Egyptians used the juice of the pomegranate to fight intestinal worms and used the pomegranate skin to dye leather.  Pomegranates were commonly found on Egyptian wall paintings in tombs as they symbolized life after death. King Tut also took a pomegranate vase into the afterlife with him.
In 700 B.C. when Zoroastrianism became the major religion of the Middle East, the pomegranate became associated with fertility. The leaves of the pomoegranate tree, which remained green for the majority of the year, symbolized eternal life. Thus, pomegranate trees were planted in the courtyards of Zoroastrian temple.
Also in 700 B.C., pomegranates were introduced to the ancient Romans, who named the fruit “Punicum malum” or “Phoenician apple.”  They grew in shady areas of residential courtyards for Roman people to enjoy.  Roman women wore headdresses made of pomegranate twigs to symbolize their status as married women.
In Greek mythology, Hades, Lord of the Underworld, famously used a pomegranate to tempt Persephone, daughter of Zeus and Demeter. When Persephone succumbed to temptation and ate the arils of the pomegranate, she was joined to Hades forever.  Demeter, heartbroken at the loss of her daughter, prevented the earth from bearing fruit unless her daughter returned to her from the Underworld.  Zeus arranged a compromise with Hades, providing that Persephone would only live with Hades for one third of the year, and the other two thirds with Demeter.  The arrival of Persephone from the Underworld each year signifies the arrival of Spring. 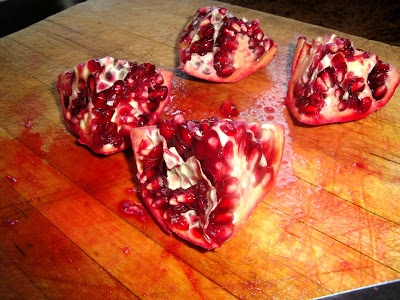 In Buddhism, the pomegranate is considered to be one of three blessed fruits. The legend is that between the period of 563-483 B.C., many of the Buddha’s wealthy disciples presented him with lavish gifts. When an old, destitute woman presented the Buddha with one small pomegranate, the Buddha rang the bell of honor in her name and considered this to be his greatest gift. Pomegranates are widely depicted in Asian art as a tool to repel evil spirits and is a symbol of good health and blessings.
In Islam, the legend is each pomegranate contains one aril that has been descended directly from paradise. In 600 A.D., the prophet Muhammad considered the fruit to be a cornerstone of good physical and emotional health. Pomegranates are abundant in Islamic art and architecture.
The pomegranate arrived in North America around 1521 A.D., after Spanish conquistador Hernando Cortes conqured the Aztecs in Mexico, Spanish missionaries planted pomegranate trees.  The pomegranate was then transported north to missions in California and Texas.
It is said that Thomas Jefferson planted pomegranates at his plantation, Monticello, in Virginia and that the English colonies attempted to grow them as well.  However, the fruit did not adapt to the harsh weather in the Northeast and fared better when it was grown in the south, namely, in Florida and in California.  Today, pomegranates are primarily harvested in California but are available throughout the United States. They are in season from August through December and are readily available in Northeastern Pennsylvania in November and December.
In 2002, POM Wonderful launched a line of conveniently extracted and packaged pomegranate juice. POM Wonderful grows, juices and bottles its own fruit and promises 100% authentic pomegranate juice free of added sugar, colorants and other low-grade fruit juices. 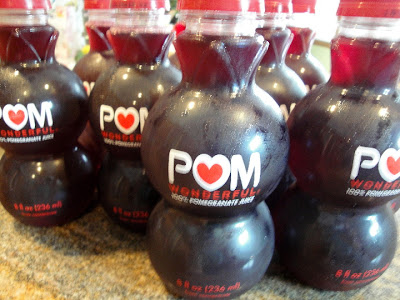 This year, I was delighted to receive a complimentary case of POM Wonderful pomegranate juice to use in my culinary recipes. As a little girl, I enjoyed eating pomegranate seeds and was amazed at the inside of the fruit. I wasn’t aware of how many culinary uses there were for the pomegranate, and had fun experimenting with different recipes on the POM Wonderful site. The bottled juice is easy to use in the kitchen. Here is a sampling of the POM recipes below, great for easy and fun holiday entertaining. You can find more recipes by visiting the POM Wonderul website.
Pomegranate Cream Cheese Icing

Directions:
Pour the POM juice in a small saucepan and reduce on low heat until the mixture has a syrup like texture.Set aside and let cool.  In a large mixing bowl, combine the butter and cream cheese. Beat and slowly add the powdered sugar and POM syrup.

Pomegranate Pear Salad with POM Honey Dijon Dressing
(Serves 8)
This recipe is by Chef Michael LeClerc of 350 Main Brassiere in park City, Utah. It appears courtesy of POM and can be found here.

Pear Salad: Score 1-2 fresh pomegranates and place in a bowl of water. Break open the pomegranates under water to free the arils (seed sacs). The arils will sink to the bottom of the bowl and the membrane will float to the top. Sieve and put the arils in a separate bowl. Reserve 1/2 cup of the arils from fruit and set aside. (Refrigerate or freeze remaining arils for another use.) Toss the salad greens with just enough dressing to lightly coat. Top with almond slices, blue cheese crumbles and sliced pears. (Slice the pears at the last minute to prevent browning.) Garnish with fresh pomegranate arils.
Pomegranate Guacamole
(Serves  8)
This recipe appears courtesy of POM and can be found here on their website.
It’s a really great way to incorporate healthy benefits of pomegranates into a festive holiday appetizer. It’s also delicious on pita chips!

Directions:
Place diced avocados in bowl. Score 1 fresh pomegranate and place in a bowl of water. Break open the pomegranate underwater to free the arils (seed sacs). The arils will sink to the bottom of the bowl and the membrane will float to the top. Sieve and put the arils in a separate bowl. Reserve 1/2 cup of the arils from fruit and set aside. (Refrigerate or freeze remaining arils for another use.) Add 1/4 cup pomegranate arils and the remaining ingredients to the diced avocados. Mix well. Add salt and pepper to taste. 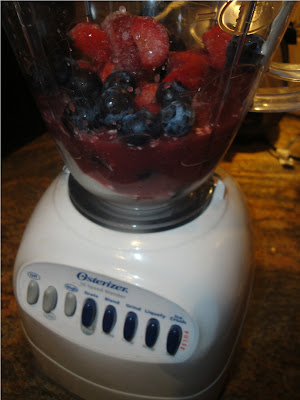 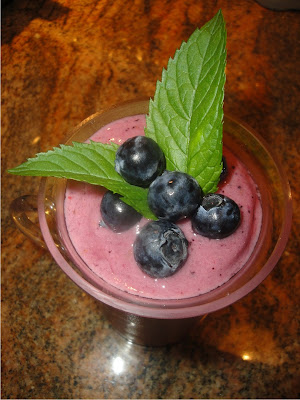